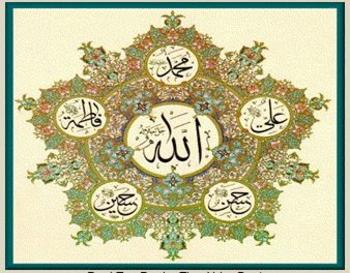 What is Panjtan Pak? Also known as the Holy Pentagon.

The Holy Five include
Prophet Muhammad (PBU), Hazrat Ali, Hazrat Fatima, Hazrat Hassan and Hazrat Hussain (peace & blessings upon them all). The Holy Five are also referred to as People of the House – Ahl-e Bayt also transliterated as Ahl al Bayt depending upon the Farsi or Arabic root.

The Panj Tan Paak are the Five Purified Ones of the Prophet’s family who attained this status by many incidences that took place during the Prophet’s life. These historical events are not only supported by verses revealed in the Holy Quran, but also from the sayings of the Prophet Muhammad, referred to as the Hadith. Not only are these the main sources of the information, but the life and Culture of every Muslim, be he from Arabia, Egypt, Indonesia, Africa, Iran, or the West, abounds with veneration to these five exalted beings. This devotion is visible in wonderful renditions in calligraphy on artifacts, jewelry, taawiz (amulets), as have impressions been left on Islamic architecture during many ages in many languages and countries. The love for these Holy Five takes expression in devotional poetry, Qawaalis, Qasidas and Essays and sermons. Its engraved on the mind and soul of every devoted momin who will recite the Salawaat at the mention of anyone from the Prophet’s family.

The Battle of Karbala

Took place on Muharram 10, in the year 61 of the Islamic calendar  in Karbala, in present day Iraq. On one side of the highly uneven battle were a small group of supporters and relatives of Muhammad’s grandson Husain ibn Ali, and on the other was a large military detachment from the forces of Yazid I, the Umayyad caliph, whom Husain had refused to recognise as caliph. Husain and all his supporters were killed, including Husain’s six months old infant son, and the women and children were taken as prisoners. The dead are regarded as martyrs by Muslims, and the battle has a central place in Islamic history and tradition with particular emphasis in the faith, and has frequently been recounted in Islamic literature.

The Battle of Karbala is commemorated during an annual 10-day period held every Muharram by  many Sunnis, culminating on its tenth day, Ashura.

It is widely regarded as an event which saved Islam. Hussein bin Ali is credited with saving Islam from oblivion by offering timely sacrifice to draw the line of demarcation between real Islam and the version promoted by the tyrannical Yazid.