Ali was an embodiment of knowledge and wisdom. Some of the sayings of Ali that breathe wisdom and have attained the dimensions of aphorisms are on record. Some of these are quoted hereunder:

Fear God and you will have no cause to fear any one.

Resignation to the Will of God is the cure of the disease of the heart.

The word of God is the medicine of the heart.

Lead such a life, that, when you die, the people may mourn you, and while you are alive they long for your company.

The days of life pass away like clouds, so do good while you are alive.

Of all the follies the greatest is to love the world.

Opportunity is swift of flight but slow to return.

Pride, cowardice, and miserliness are bad for me but good for women.

The most happy is he to whom God has given a good wife.

He who knows himself knows God.

Do not soil your conscience for anything but heaven

To fight against one’s desires is the greatest of all fights.

The strongest amongst you is he who subdues his self.

Wealth and greed are the roots of all evils.

Riches without faith are the greatest poverty.

A man’s worth depends upon the nobility of his aspirations.

The learned lives, although he dies.

The sum total of excellence is knowledge.

To respect the learned is to respect God.

The wealth of a miser is as useless as a pebble.

Desire is one’s most inveterate enemy.

Those who walk on the surface of the earth shall one day be interred in it.

Every breath of man brings him nearer to death.

People are asleep as long as they are alive, they are awakened when they die.

Patience is the fruit of faith.

A man’s glory from his virtue is greater than the glory of his pedigree.

No shelter is safer than piety.

A man’s behavior is the index of his mind.

Courtesy costs nothing but buys everything.

He that lends a listening ear to reproach is one of those that deserve reproach.

Forgiveness is she crown of greatness.

Carnal appetites are nets spread by the devil.

Every arrow does not hit the mark, nor every prayer granted.

Fear none but your sins.

He who praises you murders you.

A man who praises himself displays his deficiency of intellect.

Honor your parents and your sons will honor you.

A man is hid under his tongue.

The tongue of a wise man lies behind his heart.

The tongue pierces deeper than the spear.

He who purifies his heart from doubt is a believer.

The opinion of a wise man is an oracle.

To seek counsel is to go to the fountain of guidance.

Association with a fool is tyrannical to the soul.

God hastens the fall of tyrants.

A tyrant’s success is his moral defeat.

It is better to die than to beg.

When a man begs he loses his faith.

Hajj is the Jihad of every believer in faith.

A wise enemy is better than a foolish friend.

Silence is the best reply to a fool.

The best speech is one that is short and reasonable.

Speech is like a medicine, a small dose of which cures but an excess of which kills.

He that has no courage has no religion.

His grief is long whose hope is short.

The right of freedom of speech consists in speaking the truth.

Folly is an incurable disease.

To assist the wrong is to oppress the right.

Sinning is a disease, repentance is its medicine, and abstinence from it a sure cure.

Sorrow makes a man old before his time.

To forgive is the crown of greatness.

He who understands humanity seeks solitude.

Right is the best argument.

As a man’s wisdom increases, so his desire to speak decreases.

He who seeks to do justice with men, let him desire for them what he desires for himself.

The greatest sin is the sin that the sinner considers to be ordinary.

Contentment is the asset which is never exhausted.

Governments are a trial for men.

He who fights against the truth, the truth will defeat him.

Finding fault in others is one’s greatest fault.

Haste is a species of madness.

He who does not know his own worth is doomed to destruction.

The best investment is one with which duties are performed.

Anger is a fire kindled, he who restrains anger extinguishes the fire; he who gives vent to it is the first to be consumed by such fire.

Jihad is the highway of prosperity.

None is more solitary than a miser.

Knowledge is the ornament of the rich, and the riches of the poor.

Knowledge is the sum total of excellence.

He who teaches you a letter binds you with a fetter of gratitude.

He who indulges in jokes and loose fall, loses a part of his wisdom.

Truth is bitter, but its result is sweet; falsehood appears to be sweet but it is poisonous in its effect.

Miserliness is the root of many evils.

Knowledge and practice are twins, and both go together. There is no knowledge without practice, and no practice without knowledge.

He who dissembles plays with his honor.

When God wants to humiliate a person He deprives him of knowledge.

When your power increases, decrease your desires accordingly.

He who listens to a backbiter loses a friend.

It is no justice to decide a case on mere conjecture.

He who does not know his own worth is deemed to ignominy.

He who practices thrift would never be in want.

He who does not know should not be ashamed to learn.

Patience is to faith, what head is to the body. When patience goes, faith goes, when head goes, the body goes.

The grace of God is the best guide.

A good disposition is the best companion.

Wisdom is the best friend.

Good breeding is the best inheritance.

There is nothing more hateful than pride.

Mix with the people with your tongue, but be separate from them in your deeds.

Be generous but do not be a spendthrift.

A wise man is he who does not despair of the bounty and mercy of God.

He who is aware of his own faults is oblivious of the faults of others.

What the eye sees the heart preserves.

Do not be misled by appearances for these are apt to be deceptive.

Do not have too many irons in the fire; concentrate on one thing at a time.

Contentment is the treasure which is never exhausted.

The advice of old men is dearer than the bravery of young men.

He who knows to keep his secret knows the way to success.

Foresight is the way to safety.

Enlighten the heart with prayers.

Strengthen your heart with faith.

Suppress all lust with piety.

Do not sell the Hereafter for the world.

Do not speak in a state of ignorance.

Do not tread the path from which you can apprehend the danger of running astray.

In the affairs of God, do not be afraid of the accusations of the evil mongers.

In all that you do seek the protection of God.

Do not covet what is undesirable.

If you seek the truth neither stray from the right path, nor be assailed by doubts.

Do not become a slave of your desires.

That wealth is no wealth which brings dishonor.

It is better to restrain your desires than to stretch your hand before others.

A little that is earned because of honest labor is better than a larger amount gained through dishonest means.

He who seeks more than what is necessary indulges in error.

To oppress the weak is the worst tyranny.

Do not bank on false hopes for that is the capital of the dead.

A wise man takes a lesson even from a minor lapse.

Overpower desires and suspicions by patience and faith.

He who does not take the middle course strays.

A stranger is he who has no friends.

When hopes are frustrated despair becomes the way of life.

He who trusts the world, the world betrays him. 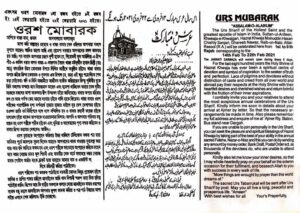